Top 10 tourist places of Ukraine in the summer 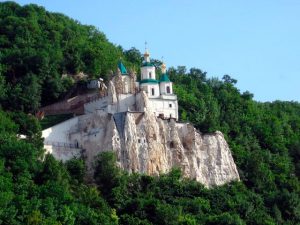 Are you tired of the “hackneyed” resorts of Turkey, and seeing the sights of western Europe is too expensive? Go on a trip to your native country and discover Ukraine in its pristine beauty!
bird home
Green monument of great love
A beautiful legend has it that in the 18th century, the noble Polish nobleman Felix Pototsky presented his wife, a Greek beauty Sofia, with a park in Uman. In order for the park to be created in record time, a loving husband ordered one of the best gardeners of that time, German Oliva, from Germany. And in 7 years, fantastic grottoes, fountains, underground sluices appeared on 150 hectares, hundreds of exotic plants were planted: plane trees, glaciers, thujas, tulip trees, many flowers from all corners of the globe.
The main entrance of the dendrological park “Sofiyivka” is decorated with two stone watchtowers, the crown of which was borrowed from the temple of the Roman goddess of the hearth, Vesta. If you walk under her crown under the arm with your chosen one, Vesta will bless you for a long and happy life. The main alley will lead you to the Flora Pavilion – a beautiful architectural structure with a white colonnade.
In the gaps between the columns there are wonderful landscapes of the Lower Pond, the eighteen-meter fountain “Snake”, the terrace of the Muses, the Belvedere. Passing the Thunder grotto and the grotto of Venus, rise along the Tarpea Valley to the Upper Pond, in the center of which lies an artificial island of Love with an elegant architectural monument in the Pink Pavilion. They say it won’t be a year after visiting the pavilion how all unmarried girls happily get married. Here you can also admire the Amsterdam Gateway, and if you are fearless, then take a boat trip in the dark along the underground river Styx, leading to the Dead Lake.
What’s next? If you don’t get tired of a lot of impressions, check out the Uman State Museum of Local Lore. One of the oldest buildings in the city of the magnificent architectural monument of the XVIII century, the Basilian Monastery, also deserves attention. It was founded in 1764 by the philanthropist Count Potocki as a Catholic school of Uniate monks.
How to get there? By car or shuttle bus from Kiev.
Cradle of Hutsul culture
The town of Yaremche is considered to be one of the most picturesque and environmentally friendly parts of the Ukrainian Carpathians. If you want to breathe the healing mountain air and feel the atmosphere of antiquity, you need to go here. Be sure to take a walk to the Probiy mountain waterfall with a twelve-meter bridge over it and visit the wooden church of St. John the Merciful, one of the best monuments of Hutsul folk architecture of the XVII-XVIIІI centuries. Check out the Church of the Nativity of St. John the Baptist. They say its iconostasis costs about a million hryvnias. Yaremche has long been the center of Hutsul crafts. So at the souvenir market near the waterfall, you can buy as a gift handicrafts made of wood, leather and goat wool, paintings and embroidered towels.
But the rest in Yaremche is interesting not only for this: in 1980 the Carpathian National Natural Park was created. Among his most interesting routes are the ascent of the highest mountain of Ukraine, Hoverla. If you are not sure that you will be able to climb to a height of 2061 m, at your services are walks on the mountains below Bruise, Hamster, Pop Ivan and along the path of the famous Oleksa Dovbush.
What’s next? Just a few dozen kilometers from Yaremche is Rakhiv – the highest mountain town in Ukraine and the geographical center of Europe. The exact coordinates of 470 north latitude and 240 east longitude were calculated about two hundred years ago by Austrian engineers, laying the railway. Now here is a memorial sign. You can also visit the famous Museum of Easter eggs in Kolomiya and see about 6,000 different painted eggs. There is a tradition in the museum: each visitor must paint an egg with his own hands.
How to get there? By car or from Ivano-Frankivsk by shuttle bus.
City of funny monuments and golden beaches
Let it sound a little pompous, but the city of Berdyansk is not for nothing called the pearl of Azov. The main pride of Berdyansk is the famous Berdyansk Spit – a strip of beaches for 20 km stretching straight into the open sea. It is here that most of the hotels and resorts are located, and there are plenty to choose from – prices per room vary from 50 to 800 UAH per day. At the base of the spit there are several salt lakes with healing mud. By the way, the famous Karlovy Vary can boast of mud of a similar composition.
There are springs of healing mineral waters on the spit, so that in Berdyansk you can not only have a good rest, but also get healthier. In addition to the Berdyansk Spit, its original monuments and sculptures are rightly considered to be the sights of Berdyansk. Here, Berdyansk will compete even with Odessa!
In the center of the city, you will see a monument to a small fish, “Steer-breadwinner”, which the Berdyans fled from hunger during the Great Patriotic Year, and a couple of bronze summer residents who persistently struggle with Colorado beetles.